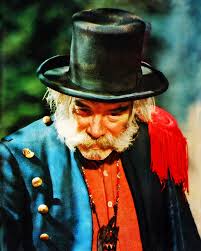 It’s cold here.  It’s raining here.  It’s a good night to put my pi’s on and call it a night, and by night…I mean watching the classic movie “Paint Your Wagon.”  This has been a family favorite of ours for many, many years.  Let me give you a short run down of this film. Wikipedia describes it as follows:

Pardner is initially innocent and romantic, illustrated by him singing a pining love song about a girl named Elisa, who he later sheepishly confesses exists only in his imagination. Pardner is a farmer who hopes to make enough in the gold rush to buy some land, and is openly suspicious of the drunken and seemingly amoral Ben. Ben claims that while he is willing to fight, steal, and cheat at cards, his system of ethics does not allow him to betray a partner. Ben will share the spoils of prospecting on the condition that Pardner takes care of him in his moments of drunkenness and melancholy.

After the discovery of gold, “No Name City” springs up as a tent city with the miners alternating between wild parties, and bouts of melancholy. The men become increasingly frustrated with the lack of female companionship, so the arrival of a Mormon, Jacob Woodling, with two wives is enough to catch the attention of the entire town. The miners claim it is unfair for the Mormon to have two wives when they have none. They persuade him to sell one of his wives to the highest bidder. Elizabeth, Jacob’s younger and more rebellious wife, agrees to be sold based on the reasoning that whatever she gets, it can’t be as bad as what she currently has.

A drunken Ben winds up with the highest bid for Elizabeth. Ben is readied for the wedding by the other miners, and is married to Elizabeth under “mining law,” with Ben being granted exclusive rights to “all her mineral resources.” Elizabeth, not content to be passively treated as property, threatens to shoot Ben on their wedding night if she is not treated with respect. While she believes Ben is not the type to truly settle down, this is acceptable if he builds a proper wooden cabin to provide her with some security for when he inevitably leaves. Ben is impressed by Elizabeth’s determination. He enlists the miners to keep this promise, and Elizabeth rejoices in having a proper home.

Sensing the other miners becoming obsessed with her, Ben is consumed by jealousy and paranoia. News comes of the pending arrival of “six French tarts” to a neighboring town and a plan is hatched to kidnap the women and bring them to “No Name City”, thus providing the other miners with female companionship. The town will prosper with additional sources of income as other miners from outlying regions will likely be willing to spend their money in No Name City if it means a chance to visit prostitutes. Ben heads up the mission and leaves Elizabeth in the care of Pardner. The two fall in love, whereupon Elizabeth, saying she also still loves Ben, convinces them that “if a Mormon man can have two wives, why can’t a woman have two husbands?”

There are a lot of twists and turns that follow this.  You just have to watch it, to appreciate the movie.  Grab a drink, and a bag of popcorn and let the good times roll. 🙂

Do You Pronouce it “Caramel” or “Caramel?”

The Joke of the Day