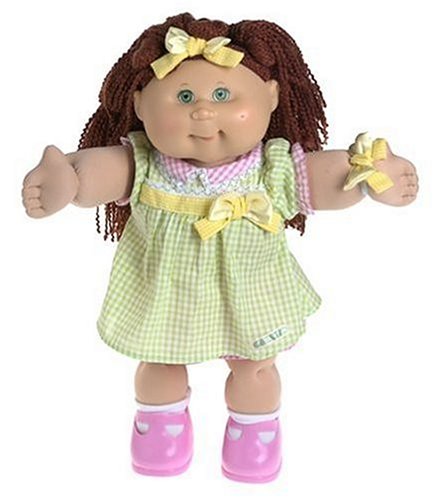 So you survived another Christmas

Well, here it is a couple of days after Christmas, and the kids are probably hanging around playing with their Christmas booty.  As you take a deep breath and contemplate the hoops that you jumped through, (Especially you mothers.) do you feel an overwhelming sense of relief and satisfaction?  Did you pull off nothing short of yet another Christmas Miracle?

As I was watching the kids and contemplating what they were playing with and as I thought about how oblivious they were to the things that were accomplished in order to give them a joyful Christmas, I began to think about all of the crazy lengths parents, grandparents, friends, spouses and even siblings go to in order to deliver Christmas wishes.

It caused me to think back to 1983 or 1984.  I was in my late teens, and there was a craze.  Not just any craze, but a Cabbage Patch Kids craze.  I mean every kid in the world wanted to “adopt” a Cabbage Patch doll.  They have big rounds heads, and the early versions came with cloth bodies.  Every one came with some type of adoption certificate. Well, my mother is much like any mother when it comes to fulfilling their children’s wishes, and so that is where I come into the picture.  Well it turns out that Angel wanted a Cabbage Patch baby.  Mother had heard that a store 30 miles away in Vernal had received a shipment and that I needed to go and get one of these dolls.  I drove the distance and waited in line for what must have been two hours.  Well to make a long story short, I was successful at getting the doll.  It’s only now as a parent that I can really appreciate what parents do in order to help their children’s Christmas wishes come true.

Several years ago, some of our older children were younger, and we got caught in the “Tickle Me Elmo” craze.  I can’t even remember the things we did to get the little red furry Elmo that laughed as you “tickled” him.

I know I’m not alone here.  As a matter of fact, there was a movie made about this very topic called “Jingle All The Way” which starred Arnold Schwarzenegger. “Ahnold” is essentially on a quest to get his child some type of special robot toy.  Essentially the movie follows him from store to store as he is in pursuit of this toy and shows the craziness that ensues as he gets in fights in order to get this robot.  The interesting thing is that art portrays reality.  You know what I’m talking about, because if you haven’t been caught up in some craziness yet, you probably know someone who has.

We haven’t even scratched the surface of the people that camp out for three, four or five days in freezing temperatures in a tent, just to be first in line for a sale.  You know, the Walmart stampede or the Best Buy black Friday sale.  My wife has been known to go out as early as 5:00 A.M. to do some shopping, bless her heart, but not me.  I suppose I would if I were asked, but it’s really not in my nature to go to really great lengths.

These are just a couple of examples.  Some of you are probably aware of the Furby’s.  Maybe you have heard of Zhu Zhu Pets.  If you are “Old School”, maybe you were sent to go get a G.I. Joe doll or Tonka Truck.  (Ok, I will admit it, I had a G.I. Joe action set.  It was pretty cool.  G.I. Joe had fuzzy hair and a fuzzy beard and a type of James Bond van with a trailer.) My friend and I used the acrylic van lid as a snow sled for GI Joe, it worked great. As I do a little reading about top toys, I see a lot of the top toys are digital games and consoles and the likes.  I mean Playstations and Nintendo’s etc…  Fortunately, we haven’t been caught in a situation where there is a particular product in extremely high demand, but you may know of some.

So lets hear it.  I know you have “horror” stories about getting that certain present.  Spill the beans.  Was it you, a spouse, a neighbor?  What happened?  While we’re at it, what gift that you received stands out?  More recent?  Many… many… many years ago?  Dust off the cobwebs and tell us about it.

I Am Halloween Candy’s Bitch

My List of Ten Things, That Will Make You Live to...

Top 10 Gary Allan Songs You Might Not HAVE Heard!

Clowning Around or Genuine Fear?