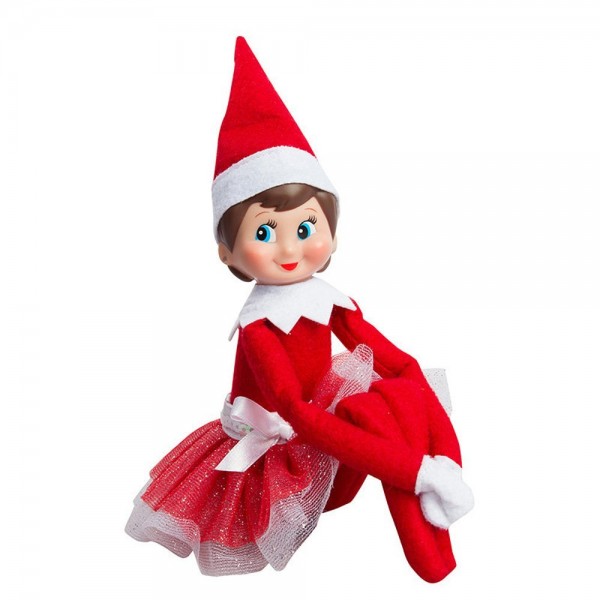 Okay. It’s almost that time of year.  The F’n  “Elf on the Shelf ” time of year.  Last year, I had a small case of temporary insanity, and buckled under pressure.  I bought the damn thing for Elle, and said bad, bad words everyday for a month after the incident.  I had nightmares about the stupid thing.  Don’t ask me why, but I’m already thinking of ideas for this year.  I want to be more prepared.  I want it to be fun for me and the littles.  I want to kick ass!

Let me introduce you to the little Diva in red.  Her name is Genowefa Maciejewski.  At the tender age of two, she was placed into a Polish orphanage .  Her Mother, who was born in America played the cowbell in a small American band.  While on tour, their plane caught on fire, and crash landed, leaving one lone survivor.  With nothing left, her Father set out to support his daughter.  Doing the only thing he knew how, he became a world famous Ping Pong player.  In a freak accident, he choked to death on a ping pong ball in the last round of the World Championship.  “G” has many issues, and we are working hard to help her feel like part of our family.  She has come along way, but she has more therapy ahead of her.

“G” does not play well with others.  She doesn’t like Disney Princesses.  She does not like the Cat in the Hat. She does however, like…or shall I say l o v e Prince Eric.  I think they are up to something.  Look how he is just waiting..watching…hoping for the train to take out both Snow White and Ariel.  If you ask me, I think they are in KaHootS with each other.  Little does “G” know, she is only a fling.  A one night stand.  A little piece of meat. And we wonder why she has issues….

After she found out that Prince Eric was actually shacking up with Belle, “G” became very depressed.  She cried for days.  Nothing was going to get her through the pain of being caught up in the game.  Unfortunately, she tried to take her own life, by over dosing on teething tables.  We caught her just in time to save her.  She lived!  It was almost a Christmas Day miracle….almost.

Of course the aftermath of taking so many teething tablets, is none other than the squirts.  The grips.  The back door trots.  The green apple quick step.  Montezuma’s revenge.  The whistle belly thumps.  You get what I’m talking about here right?  She learned her lesson, and was back to “normal.”  Her normal…not ours.  We talked about it, and called an emergency meeting with her Therapist, and all seemed well for a moment…..

A couple days later, she was up to her old shenanigans again.  This time, she was going to jump from the ski lift. You can’t see it here, but the local Fire Department had set up a small net underneath her.  It was a long stand off, and once again…we talked “G” out of jumping.  YAY!

The next day, I woke up with this message on my phone from Elle.  I am the first (blue) bubble, and Elle the white bubbles.  To sum up, Elle told me she toilet papered my Christmas tree.  Actually, “G” used TP garland to redecorate the tree.  Huge difference….right? I then instruct Elle to get ready for school, and her reply is what supposed to be “sucking down darjeeling with Mrs. Nesbitt.”  Yep.  That little trollop introduced my nine year old to booze.  Needless to say, it was a long damn month.  “G” is a full time job in itself.

Why do it again?  Who else does this crap?  I need ideas…and I need good ones! Oh, and if you are looking or thinking about getting an Elf on the Shelf.  DON’T!  It’s like a bad drug.  It’s a love hate relationship.  You hate to love her.  Stay tuned…what will “G” be up to this year?

“Well Sure It Is, There Is Nothing On That Plate But...

ABOUT US
Angel Monk is funny, sarcastic, a little irreverent and all-around loving wife, mother, daughter, sister and friend.
Contact us: admin@angelmonk.com
FOLLOW US
© Website by Simple Websites.
MORE STORIES
May 16, 2020